Early in his artistic career, Jimmie Durham claimed Cherokee descent. He has become a major contemporary artist. Under mounting scrutiny he’s since backed off Native heritage claims although he continues to use Native imagery in his work. A new retrospective of his work is traveling through selected institutions in North America reviving criticism that he has not adequately addressed his Native connection. Cherokee officials and artists went so far as to publicly call him a ‘trickster.’ We’ll hear from some of those who want Durham to come clean. 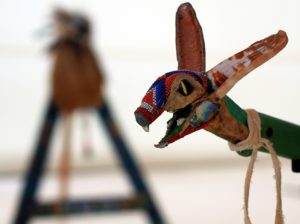 Jeffrey Gibson (Mississippi Band of Choctaw and half Cherokee) – artist